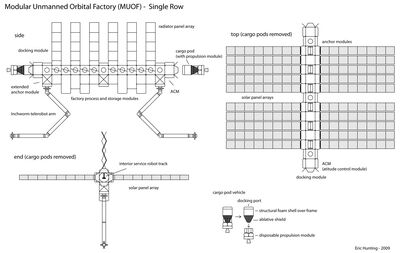 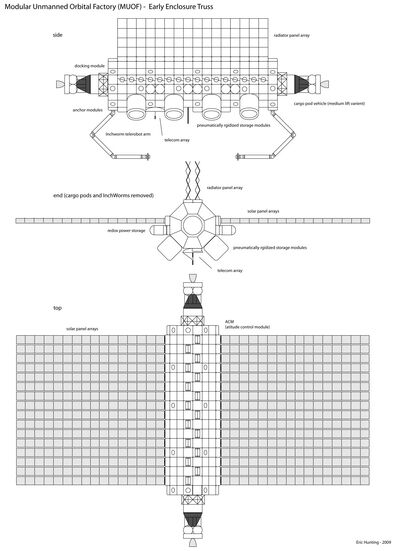 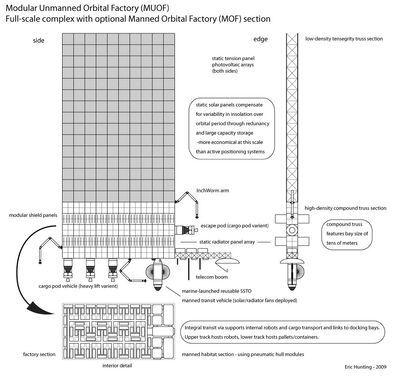 The Modular Unmanned Orbital Factory (MUOF) is the subsequent stage of development of the Modular Unmanned Orbital Laboratory (MUOL), evolving directly from its technology and, most likely, from MUOL facilities themselves. The objective of the MUOL is to pursue the industrial research that would lead to the identification of specific high-value products that can be cost-effectively manufactured on-orbit. The purpose of the MUOF is to conduct that manufacturing in earnest.

The MUOF would be based on essentially the same structural systems, service backplane, communications architecture, and business model as the MUOL. Its key difference would be the size and design of its lease space facilities, since they would now be expanded from the role of self-contained laboratories to factory systems composed of many components. And with the need to support transportation of goods in increasing volume comes the need for a new structural configuration optimizing the communication of materials between leased space facilities and transportation systems with their own dedicated docking interfaces.

With the advent of concerted industrial activity, the design of factory systems would tend to migrate away from the use of self-contained modules toward the use of ‘built-up’ enclosures where a collection of systems can be grouped together in a shielded –but still non-pressurized– space to form a more complex and adaptable production line. Paralleling the design of the earlier self-contained or laboratory factory module on a larger scale, such complexes are likely to employ a roughly radial organization with centralized robotic materials handling and use enclosure structures based on the same MUOL space frame components in prismatic geometrical forms; square, hexagonal, octagonal tubes. Such enclosures would allow for production systems based on less robust individual components –since they are partially protected from the space environment– which would be designed for easy individual replacement. At large production volumes and nearer product margins, this becomes a more cost-effective alternative to the earlier strategy of self-contained factory modules replaced whole when an internal part fails.

Initially, this evolution is likely to see the basic MUOL structure evolve into a lower density planar truss where leased space regions are associated with a large open bay portal though the plane of the platform that conforms to the shape of the factory enclosures and allows the robots on the service side of the platform to provide routine service and exchange of materials through the plane of the platform, rather than climbing around to the other side. This would greatly facilitate the exchange of materials between factories and spacecraft.

As the volume of production for orbital industries increases, it also becomes more necessary to maintain physical boundaries for materials handling to prevent the unintended generation of space debris. With the MUOL, all servicing was external, taking place on either side of a central planar space frame structure. Communications of materials to individual laboratory modules was minimal, most lab units pre-supplied with a store of test materials lasting their full duty life. Information was the primary MUOL export. With the MUOF, the communication of materials and finished products is continuous and so cartridges and containers for these must be handled very frequently. It therefore becomes more practical to perform this and most other service activities in some kind of enclosed environment that minimizes the potential loss of items, should they become detached from the structure or robot end effectors. Thus the more robust MUOF would need to seek to internalize the ‘service side’ of the earlier MUOL structure in some way, resulting in a form where the station’s primary space frame structure itself becomes a kind of enclosure.

The needs of routine and reusable vehicle transportation also favor a more enclosed structure. The MUOL relied on the use of self-propelled carrier pallet modules plucked out of free space by service robots. For its small scale of operations, this was sufficient but with increased volumes of material traffic greater efficiency in handling is needed and the designs of larger spacecraft tend to favor self-docking in a side-to-side or end-to-end position and with goods being transferred through enclosed bays or hatchways. By the time of MUOF development, the SeaStar and UltraLight SSTO families of Bifrost program vehicles may dominate transportation services to the station, calling for some degree of docking system specialization. These both favor end-to-end docking.

This sort of internalization of activity brings additional issues. At a certain dimension –most likely in the area of 9-12 meters– a maximum practical span for internal handling will be reached where it will no longer make sense to expand the width of an internal via. The maximum area of individual factory facilities is likely to be about the same, based on the efficiency of centralized robot handling within a single enclosure. Transportation demand will also increase greatly, requiring the station to host an increasing number of vehicles simultaneously. Increasing demand for power with an increase in the number of client facilities will also call for increased solar collection areas and increasing on-orbit storage space.

And, of course, to top it all off the topology of the platform at any scale must remain as simple as possible in order to facilitate the ease of servicing and ease of robotic system design to perform it.

To cope with all these changes, the likely strategy may be to transform the single-plane truss structure of the MUOL into a very large corrugated rectangular panel aligned vertically to the Earth and perpendicular to the orbital vector. Evolving readily from the original planar truss architecture simply by adding an additional truss plane, this new structure would take the form of a box truss formed of a low-density cubic grid of primary truss beams. The two large facing sides of this panel would now be covered in radiator panels like an enormous heat sink, creating a basic covering or enclosure over the whole structure. In-fill space frames between the main truss beams would become the attachment points for external shield panels (underneath the radiator panels) and internal equipment, all factory facilities now completely internalized within the space of this panel as though it were a vast flat factory building. A simple square grid would now be employed in the leased space model with a series of internal corridors reserved for robot and pallet carrier tracks. Grids of Inchworm anchor modules would still be employed for external robot use.

The perimeter edge of this corrugated panel would host all docking facilities and telecommunications, possibly with the addition of some perpendicular truss booms as extensions of the core grid just for communications arrays. Each edge docking bay could correspond with one end of a factory complex bay, extending internally. A factory’s own robots could then perform all loading and unloading. However, some shared docking bays would also be used for smaller facilities.

One facing side of the corrugated structure would be extended spaceward as a low-density frame structure. This would host solar collectors, either static and double-sided or articulated, creating a long collective solar panel. Solar arrays on today’s space stations tend to be elaborately articulated owing to the complex insolation topology presented by their high inclination orbits. But because the MUOL and MUOF programs would have the benefit of Aquarian launch facilities located along the equator, they would have the benefit of lower inclination more circular orbits which would afford the use of much simpler solar collector structures much like those of proposed GEO solar power satellites. Thus the MUOF can employ the very simple arrangement of a single solar array extending vertically relative to the Earth and perpendicular to the orbital vector. Likely employing both photovoltaic systems and solar dynamic systems over time, collector modules can be either static or use simple independent one-axis sun tracking, eliminating the need for any large and critical rotating components on the structure itself.

Looking rather like some enormous electronics component, this simple platform structure would be infinitely expandable along its two planar dimensions, freely modifying its use of space according to solar collector area and equipment/storage space demands. At some point it might even evolve into a solar power satellite to provide power to Earth, since at a certain point that may become the primary orbital export product, given the way nanotechnology will ultimately compete with on-orbit industrial processes. This structure also foreshadows the design of solar-orbital industrial facilities, the difference there being that a single continuously sun-facing panel side would be complimented by a radiator side, industrial facilities sandwiched in-between. This, in turn, foreshadows the architecture of later Solar Snowflake – Solar Ribbon ‘VRco’ habitats of the Solaria phase.

The ultimate form of the MUOF may be that of an UpStation for the Bifrost Space Elevator. Here the concept of a primary ‘core truss’ would be combined with the corrugated panel structure in the form of a radial service bay specific to access to the space elevator tether. The resulting structure would take the form of a tube surrounding the SE tether with an industrial structure panel on one or two sides. That core truss could then evolve into the spherical EvoHab style enclosure, which we will be discussing in detail in another article.